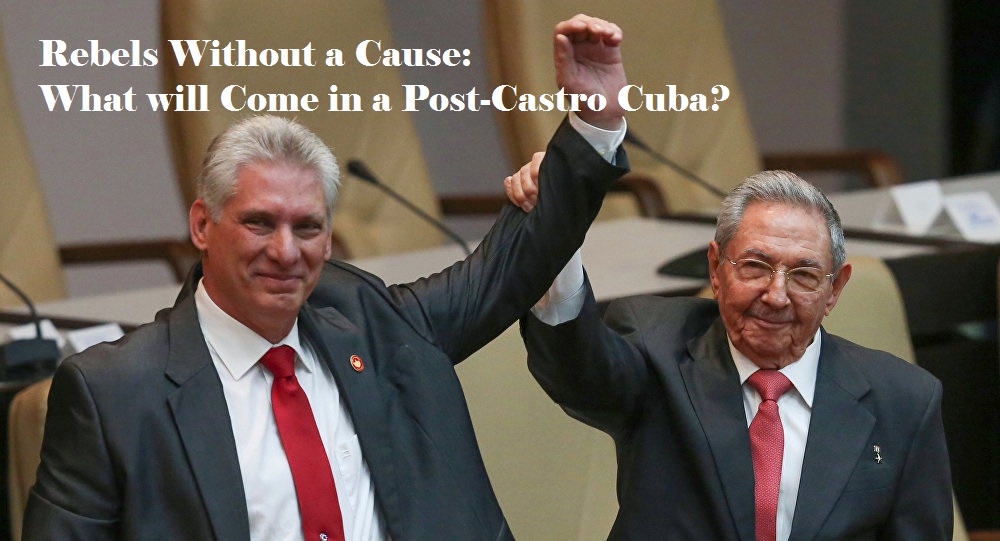 Rebels Without a Cause: What Will Come in a Post-Castro Cuba?

As Raul Castro nears his 87th birthday the Cuban President and main political force in the island’s Communist regime has stepped down from his role, allowing a new generation to step into the light of power. On Thursday April 19th, elections determined that Vice President Miguel Diaz-Canel Bermudez will be the first President of Cuba without the Castro name in over six decades.

A New Face on an Old Body

Personally selected by Raul, Diaz-Canel was voted in by 603 of 604 lawmakers. While on the surface this move seems momentous, much is expected to remain the same within the troubled country. Raul will remain the head of Cuba’s armed forces as well as First Secretary of the Communist party until 2021, the only political party in the country and the most powerful position within the country.

Though Diaz-Canel was not yet born when Fidel Castro overthrew the former U.S-backed Dictator Fulgencio Batista, he’s been described as a staunch loyalist to the one-party system and has vowed ‘continuity’ in the days to come.

In his acceptance speech Diaz-Canel laid out the plans for his term, sure to be filled with internal strife. While he will face many issues in a post-Castro era, Diaz-Canel reassured his fellow Cubans that there will be no compromise in Cuba’s foreign policies, including views on trade with the U.S.

As one of the last Soviet-style governments, the nation faces a new challenge – that of maintaining the old-school socialist values from the aging revolutionaries who still hold power, and the energized youth who wish for more economic opportunity. In his speech, Diaz-Canel emphasized the need to modernize the country and embolden Cuba’s economy.

While Cuba has been entertaining dignitaries from China and Vietnam for economic guidance, there’s still a strong sense of uncertainty as key benefactor, Venezuela, faces political and economic instability. Being a lone island, Cuba needs to import everything from basic essentials to agricultural products and oil. With Venezuela’s political unrest and a poor Cuban infrastructure, this may prove a vast task for the politically conservative politician.

Additionally, Cuba uses two forms of currency; the Cuban Peso and Cuban Convertible Peso. The dual-currency situation has existed in Cuba for over 100 years and is still confusing for both locals and tourists. While the government is holding strong on their claim to unify the two currencies the issue has caused a ‘headache’ for lawmakers and is certain to divide many.

During Raul’s tenure as President, a substantial opportunity for foreign investors was opened- namely with the US under former President Obama. While Raul proved open to previously taboo issues such as economic reform, international trade, internet access, self-employment, and real estate- many say he wouldn’t have had the people’s approval for such decisions without the ‘Castro clout’ behind him. This will be a major obstacle for Diaz-Canel to navigate as Raul is still the behind-the-scenes power.

While many view Diaz-Canel as a forward-thinking ‘Raulist’, he still holds traditional, anti-American views. A video of a closed-door meeting showed Diaz-Canel expressing disdain for Cuban dissidents and independent media. He vowed to close platforms that are critical of the Cuban government and viewed the trade agreements between Raul and Obama as simply a unique way of attempting the “destruction of the revolution.”