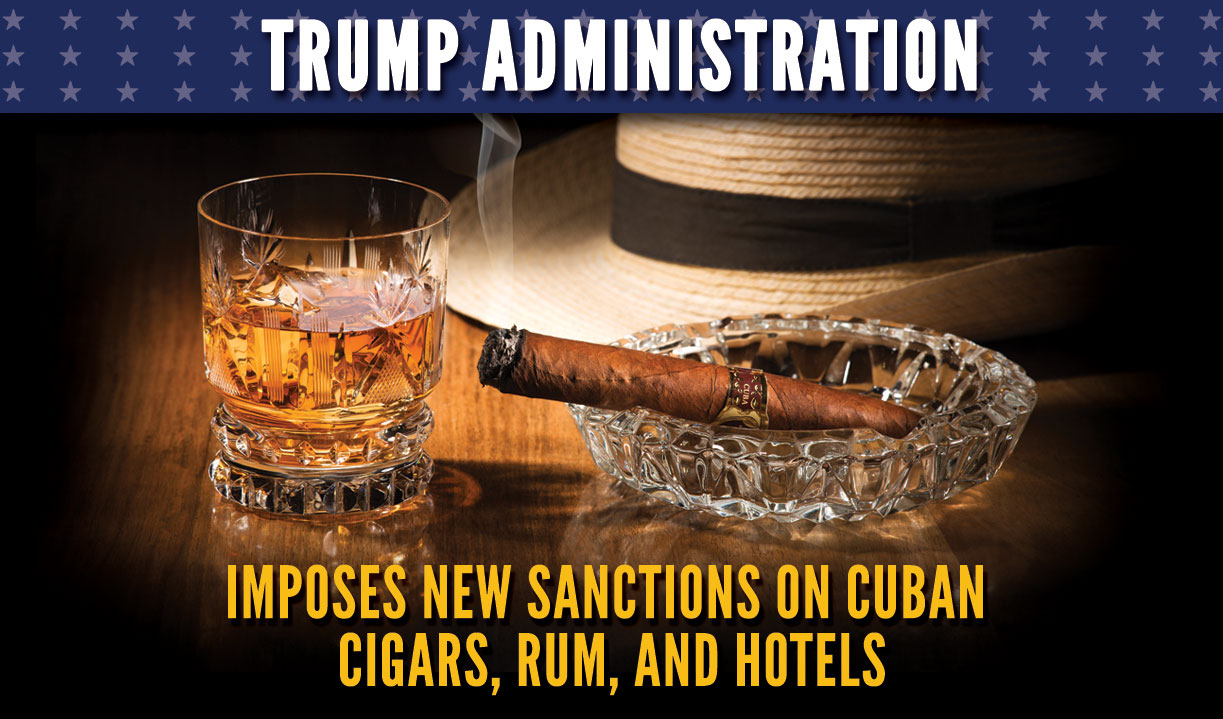 WASHINGTON, D.C. – On Wednesday, September 23 the Trump Administration imposed new sanctions on the importation of Cuban cigars and rum, including banning Americans from staying at hotels and other properties owned by Cuba’s Communist government.

Critics of President Trump see this action as another move to reverse President Obama’s “positive engagement” policy, which eased travel restrictions to the island nation, including lifting the $100 limit on bringing Cuban cigars and rum into the United States.

These latest sanctions also follow a June 2019 move by the Trump administration to impose heavy new restrictions on travel to Cuba as a way to pressure the Communist government’s support for Venezuelan President Nicolas Maduro.

“Today, as part of our continuing fight against communist oppression, I am announcing that the Treasury Department will prohibit U.S. travelers from staying at properties owned by the Cuban government,” said President Trump at a White House event honoring Bay of Pigs veterans. “We’re also further restricting the importation of alcohol and Cuban tobacco,” he added.

The key words above are “further restricting” since, according to a Treasury Department statement, it is unclear as to whether the new restrictions will actually prohibit Americans from bringing back any amount of rum and cigars, or whether it will simply impose new limits.

Deputy assistant secretary of state for Cuba and Venezuela, Carrie Filipetti, denied the announcement had anything to do with the 2019 Presidential election, especially in Florida where the Cuban-American voting bloc is crucial stating, “There is no nexus or any domestic issue,” and that the new sanctions had been in the works for some time.

The announcement has the potential to further anger some American cigar smokers since the new regulations also prohibit the U.S. purchase and importation of Cuban cigars via Canada, the U.K., and Mexico, all of which have free trade agreements with Cuba.

As far as American travel to Cuba is concerned, the State Department will be issuing a “Cuba Prohibited Accommodations List” from the Office of Foreign Assets Control (OFAC). This list will contain the names and addresses of Cuban state-owned hotel properties where U.S. citizens will be prohibited from booking rooms.

As stated in the new regulations, “[N]o person subject to U.S. jurisdiction may lodge, pay for lodging, or otherwise make any reservation for or on behalf of a third party to lodge, at any property in Cuba that the Secretary of State has identified as a property that is owned or controlled by the Cuban government, [or] a prohibited official of the Government of Cuba.” The statement even goes so far as to include close relatives of such “prohibited” officials, and the State Department has already identified 422 hotels and lodging properties, to date.

Since the spread of the coronavirus pandemic, Cuba has been closed-off to all foreign travelers, but Filipetti also said that the new policy “will continue even past the pandemic.”